Everything Else is Too Narrow:
Anne Katrine Senstad, Christine Istad and Anna Marit Staurset

Everything Else is too Narrow brings together the work of three contemporary Norwegian artists. The title is derived from a poem titled All Things by Hadewijch of Brabant (or sometimes called Hadewijch of Antwerp) who lived in the 13th century in what is now Belgium and she is often referred to as one of the greatest names in medieval Flemish and Dutch literature. The poem begins with the lines “All things are too small to hold me” and it was this tone that came to mind in relation to the works in this exhibition. Although the artists vary in mediums, processes and approaches there is a search, an act of uncovering the essence in form in each of the works. Each piece hovers somewhere in the process of becoming or decreation but also transcends temporal cycles of birth and decay. They instead are like suspended threshold occasions, revealing a visual process of when something moves away from one thing to become another. The ancient Greek word poïesis is the root of our modern word "poetry" however it was first a verb. It was an action. The action referred to anything that transforms and continues the world, but not in technical production or in a romantic sense. It referred to an action that reconciles thought with matter and the individual person in time. The works carry this tone of both reconciliation and awe. They seem to strive not to generate meaning, but rather to simply reveal the meanings that are already there.

Christine Istad uses the camera to pull out patterns and elemental structures from her surroundings. All pieces in this exhibition are large format printed on brushed aluminum and are in-depth studies of small fragments of reality. In her work she is striving for a sense of interconnection; how things relate to each other and how they fit together. She focuses on architectural structures, however the architecture is often only sensed and she pulls out the abstraction from the concrete forms. In her process she is interested in discovering, the discovery of a motif or something surprising or noteworthy in the surroundings. Her photographs are never manipulated; they are taken as they are seen.  Istad’s broader focus is on the relationship between humans and modern society. Franz Kafka wrote about what many have termed “modern man’s cosmic predicament”, the struggle of the individual within cities during his time. Istad’s work elicits a similar investigation with the themes of finding beauty and space for contemplation within alienation and searching for a place and transformation within present day architectures and super cities. She presents these slivers of space in a way that evokes an element of surprise and in doing so creates a perceptual shift ushering in a recognition that things, in fact, are not exactly as they seem and solid, stable structures can be windows into new narratives and new spaces.

The photographic work of Anne Senstad is a series titled Sonoptic Parallels and it is informed by an understanding of an amalgamation of sensations - sound, color, light and optical phenomena. She is parsing out how sound and color inhabit space so differently despite many scientific and experiential similarities. Senstad’s work also often has a close relationship with architectural structures but she adds a poetic element, creating a world that envelopes the subconscious and subliminal. Her photographic Universal Foldouts are extensions of this exploration however they also contain a kind of rational flattening of these concepts, similar to breaking things down to laws of physics and zero’s and one’s. But in doing so, the work presents the ideas that consciousness and emotions cannot be captured by theories at all because they are subjective experiences and even how describing what happens in your body while it experiences an emotion doesn't tell you what the subjective experience is. Senstad's video installation is the 7th in a series she began in 2009 and has been shown worldwide as various forms of immersive installations. it is titled Colour Synesthesia VII and is a 25.30 minute loop. The sound is the electric harpsicord by Catherine Christer Hennix recorded live in 1976 at the Museum of Modern Art Stockholm. All of her work deals with perception — how what we see, including the colors around us, shapes how we feel. The stimuli are objective but the experiences are subjective, mirroring ourselves, our brains, and our psyches. Senstad’s work follows this complex investigation of what is physical versus what is psychological, and where these lines blur. It does so generously, seeing truth on both ends of the spectrum and at many points in between.

In the work of Anna Marit Staurset part of the search and interest is the deterioration of materials. Every piece of collage has its own history and they come together into an expanded history, like sections of a quilt. In this way the material is stripped of its original meaning and given a new life, like stories that are told and shared. There is a strong element of neutralizing the past through these physical sediments of time and layers of multiple histories. She transforms them to convey new meanings. This act creates a cultural catharsis in the pieces and an element of reclamation. The material is mainly paper but becomes sculptural with a very tactile surface. She focuses on the patterns of life, death, and decay revealing an essence of what remains after a lived life and a cyclical return to begin anew. Her use of materials contains a paradox in itself for applying the burden of history to a light material and this aspect of the work aids in the transformation from cultural weight to transcendence and release. In relation to the title in the poem, the works have a tone of solitude in their differing investigations on the relationship between self and states of being. This tone is a true solitude, solitude as a struggle against alienation, as deep witness and response.  The response seems to be an awareness of or need to break things down to their essence in a time of over complication and countless distractions.  This solitude is not the same as withdrawal, which has negative connotations. It is an awareness that does not hold the world at arms length but rather walks us right into it and is expressed by entering into the world fully through these immersive and sensorial works.

All things
are too small
to hold me,
I am so vast

In the Infinite
I reach
for the Uncreated

I have
touched it,
it undoes me
wider than wide

Everything else
is too narrow

You know this well,
you who are also there 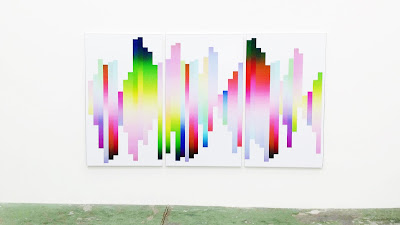 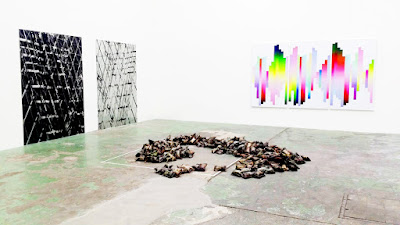 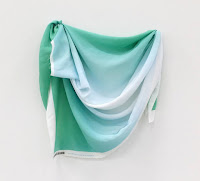 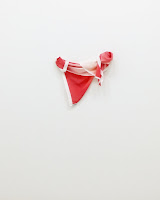 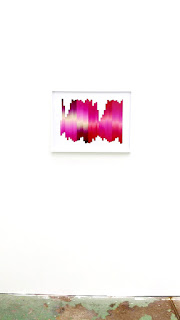 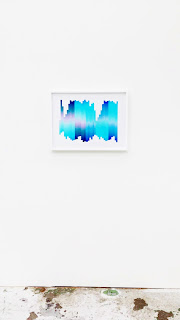 Sarah Walko is a curator, director, visual artist and writer. She is currently the Director of Arts Programing at Marble House Project, a nonprofit arts organization in New York City and Dorset, Vermont. Recent curatorial projects include Decomposing Hierarchies, Manhattan Bridge Anchorage, NY 2015, The World and its Things in the Middle of Their Intimacy, Fridman Gallery, NY and A Cage Went in Search of a Bird at Radiator Gallery, NY. She also writes for the contemporary art blogs and journals Hyperallergic, Eyes Towards the Dove and Drain Magazine Journal of Art and Culture.
Posted by Anne Katrine Senstad Links to this post
Email ThisBlogThis!Share to TwitterShare to FacebookShare to Pinterest
Newer Posts Older Posts Home
Subscribe to: Posts (Atom)